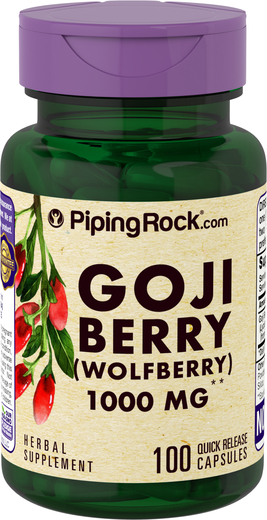 Goji is a variety of berry native to China. The fruit has an extensive history of use in Traditional Chinese wellness practices. It works to:

Goji, also referred to as wolfberry, is a small reddish fruit that has a subtly sweet and tangy flavor. Grown as a blooming perennial, the berry, botanically known as Lycium barbarum, is common in China and has been incorporated into the nation's culinary and wellness traditions for thousands of years. The northern region of Ningxia is particularly renowned for its high-quality wolfberries. Famed Chinese herbalist Li Ching-Yuen, who claimed to be extraordinarily long-lived, ate the berry as part of his daily diet, and its ancient wellness reputation is largely tied to these purported anti-aging effects.**

In recent years, goji berry has become increasingly popular in the West and is widely considered to be a "superfruit." This status stems from its nutritional profile, which includes vitamin A and C, various minerals, polysaccharides, the eye-supportive carotenoid zeaxanthin and other antioxidant-rich polyphenols. Research on the fruit has moved forward considerably since 2010, with studies pointing to a number of health benefits.**

Investigations have shown that wolfberry contains abundant antioxidants, which help to fight harmful free radicals and work against age-accelerating oxidative stress. Of the many antioxidant polyphenols in the fruit, specific attention has been given to its content of zeaxanthin, a natural pigment closely tied to healthy vision, particularly in senior populations. Studies have also indicated that the berry may aid in supporting circulatory wellness, including blood sugar and blood pressure, and liver health.**

Further research shows that the fruit's antioxidant activity assists in modulating inflammation and upholding ideal immune function. One randomized, double-blind and placebo-controlled study found that daily consumption of the berry's juice promoted the subjects' feelings of overall well-being, including mood, cognitive performance and digestive health. These findings reinforce wolfberry's reputation as a tonic for general wellness.**

Goji berry is available in a variety of forms, including juice, capsules and dried fruit. As a liquid or capsule supplement, it may be combined with other superfruits such as acai, mangosteen and noni in a nutrient-rich formula.**

Goji Directions for Use

Seek advice from your health care professional before taking this nutrient as a supplement. Standard suggested dosage has not been set. Capsules are commonly offered in the range of 500-600 mg.**