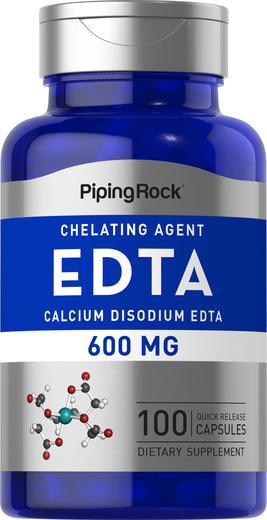 EDTA, a renowned chelating compound, removes heavy metals from the body. Also known for its regulation of inflammatory responses, EDTA works to:**

Ethylenediaminetetraacetic acid, widely known as EDTA, is a chelating agent that binds to heavy metals (especially lead) and toxins in the circulatory system. Once the acid “grabs” these substances, they can no longer cause harm and are carried safely out of the body. This process is known as chelation therapy. For decades, EDTA has been used as a therapeutic chelation agent to remove lead from the bloodstream.** It has been approved by the FDA specifically for this purpose.

In recent years, EDTA has also garnered interest for its potential as a promoter of cardiovascular wellness.** An approach that calls upon the amino acid to support heart and circulatory health, chelation therapy has been the focus of numerous scientific studies. During early 2013, researchers published the outcome of TACT, the extensive, long-term Trial to Assess Chelation Therapy. The results indicated that chelation therapy with infusions of disodium EDTA reduced the likelihood of cardiovascular issues by approximately 18%.**

While the exact mechanisms of EDTA’s potential heart-healthy influence remain unknown, some theories suggest the nutrient may promote cardiovascular health by “de-calcifying” the blood vessels, binding and flushing away minerals to promote venous flexibility.** Consistent with this theory, EDTA is often taken with essential nutrients such as B-complex vitamins, vitamin C, calcium and magnesium to restore vitamins and minerals that the compound may take with it.

Additional research has found that EDTA has high antioxidant activity that helps to neutralize destructive free radicals throughout the body.** Through its antioxidant effect, the compound may help to modulate inflammation and support nervous system wellness, vision health and healthy aging.**

EDTA Directions for Use

Prior to beginning any supplementation, it is important to consult with your primary care physician. Though there is no suggested EDTA dosage, supplements are commonly available as 600 mg capsules.